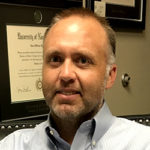 Jim grew up in Plano, TX, graduated from Plano senior high school and holds a Psychology degree from the University of North Texas and a M.A. in Professional Counseling from Amberton University. He spent several years as a financial advisor with Morgan Stanley; then several more as a Sales Rep for the Xerox Corporation, but wanting more of a personal connection with people, he decided to open a franchise business in Plano.  After four successful years Jim found himself yearning to help people on a deeper level.  He began thinking and reflecting about why he had not continued his journey to graduate school to become an LPC after his undergraduate studies. His answer was life. Life happens and sometimes we lose track of our dreams, and desires.  Life happens and sometimes dreams get clouded or cast aside, but Jim realized that was the path he longed to be on so he went back to school. Within two years of his enrollment at Amberton, Jim negotiated the sale of his business, graduated with his Master’s degree in Professional Counseling, completed the National Counseling Examination and received his Professional Counseling License. Jim completed his intern hours at an Intensive Outpatient Program (IOP) where he later became the Clinical Director before leaving to open his private practice. Jim brings to the Frisco Behavioral Health Group a wealth of knowledge; unique insight and past experiences that help him counsel adults, adolescents, individuals and couples.  Jim has had experience with, and a keen interest in, Anxiety disorders, Grief, Anger, Addiction, Marriage Problems, Male and Female Gender Specific Problems, End of Life and Caretaker Issues, and has recently began his training to become a Certified Eating Disorder Specialist, with an emphasis on Male Eating Disorders  and Body Image issues. Some people are looking to overcome their struggles so that they may grow into the person or couple they strive to be while others may just need to be able to come to terms with who they are or the hardships they have endured. Either way Jim is confident he can help you on your journey to reach your goals whatever they may be. The hardest part is taking that first step and asking for the help that you deserve. Jim finds peace in the great outdoors and in his developing yoga practice; is an avid bass fisherman, enjoys playing golf, softball, and shooting sporting clays. He and his wife reside in Frisco with their son and spoiled YorkiPoo Dixie.